During the ceremony at St James’s Palace in London this morning, he made a personal declaration on the death of his beloved mother Queen Elizabeth II and vowed to uphold ‘constitutional government and to seek the peace, harmony and prosperity of the peoples of these islands, and of the Commonwealth realms and territories throughout the world.’ 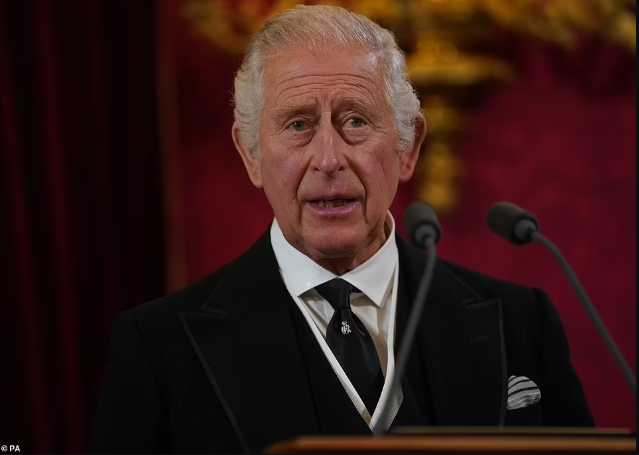 Charles automatically became Sovereign on the death of his mother aged 96 at Balmoral Castle on Thursday afternoon, but the Accession Council,  an ancient body of advisers that dates back as far as the time of the Norman Conquest, formally announced his role as Head of State today.

At 11am, trumpets then blared from the balcony of St James’s Palace as the Principal Proclamation announcing the King was read out. Crowds gathered outside the palace as the King was officially proclaimed Sovereign of the United Kingdom of Great Britain and Northern Ireland, including Supreme Head of the Church of England and Commander-in-Chief of Britain’s Armed Forces, as well as Head of State of the Commonwealth and British territories around the world. 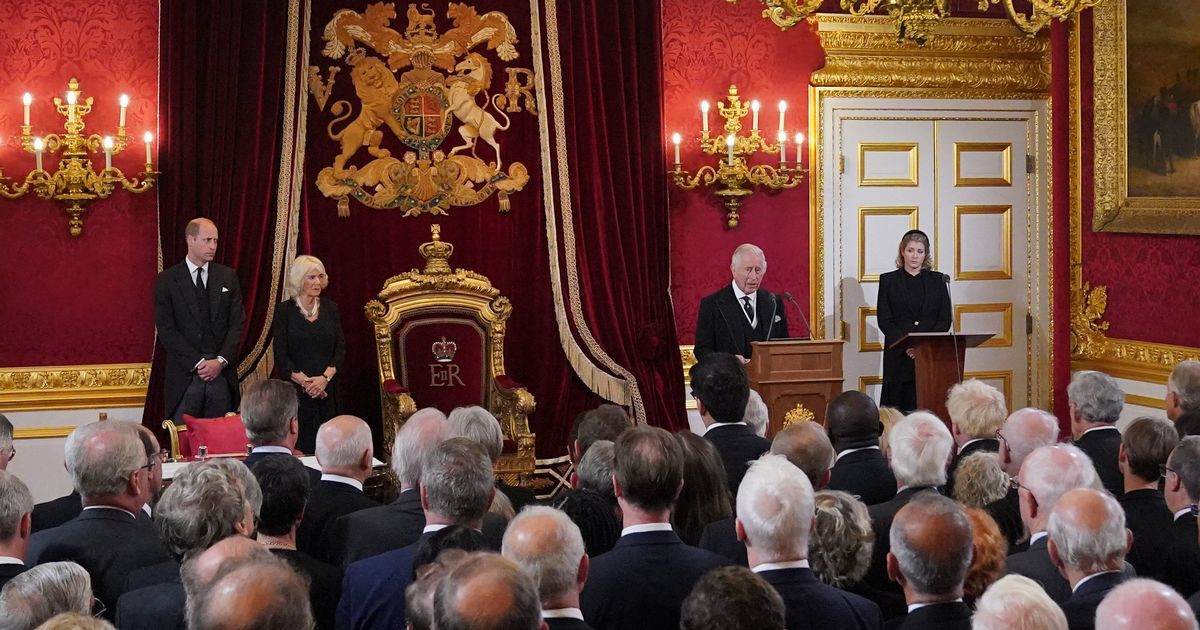 On a balcony above Friary Court in St James’s, David White – an official known as the Garter King of Arms – read the proclamation. He ended by saying: ‘Given at St James’s Palace this 10th day of September in year of our Lord 2022.’  In the moments after, ‘God save the King’ was shouted out. 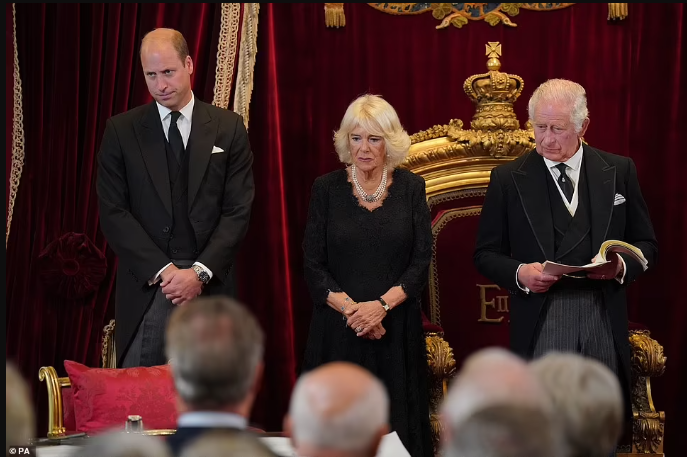 Paying tribute to the Queen at the throne room of St James’s before the assembled Accession Council shortly after 10.20am, the King also approved an order that the day of the Queen’s funeral will be a bank holiday.

Making his declaration, Charles III said: ‘My lords, ladies and gentlemen, it is my most sorrowful duty to announce to you the death of my beloved mother the Queen. I know how deeply you, the entire nation, and I think I may say the whole world, sympathise with me in the irreparable loss we’ve all suffered. 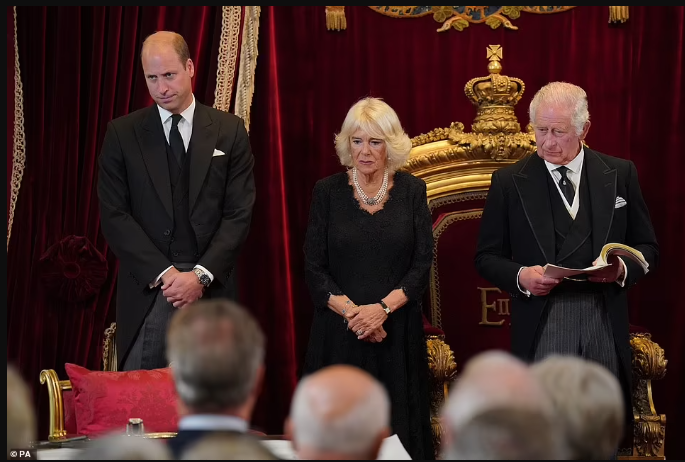 ‘It is the greatest consolation to me to know the sympathy expressed by so many to my sister and brothers. And that such overwhelming affection and support should be extended to our whole family in our loss.’

Continuing the declaration, the King said: ‘In taking up these responsibilities, I shall strive to follow the inspiring example I have been set in upholding constitutional government and to seek the peace, harmony and prosperity of the peoples of these islands, and of the Commonwealth realms and territories throughout the world. 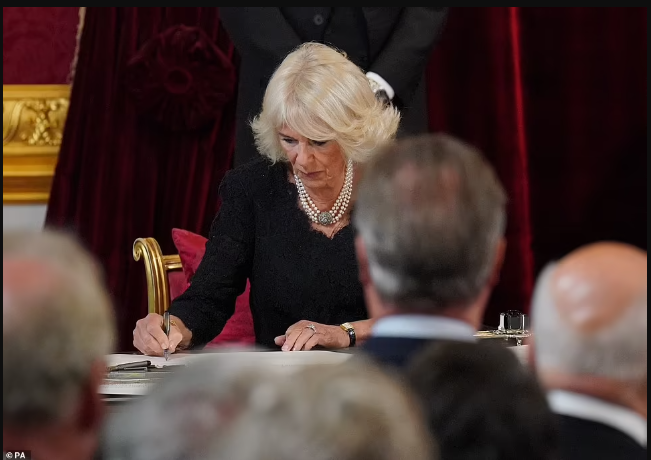 ‘In this purpose, I know that I shall be upheld by the affection and loyalty of the peoples whose Sovereign I have been called upon to be, and that in the discharge of these duties I will be guided by the counsel of their elected parliaments.

‘In all this, I am profoundly encouraged by the constant support of my beloved wife. I take this opportunity to confirm my willingness and intention to continue the tradition of surrendering the hereditary revenues, including the Crown Estate, to my Government for the benefit of all, in return for the Sovereign Grant, which supports my official duties as Head of State and Head of Nation. 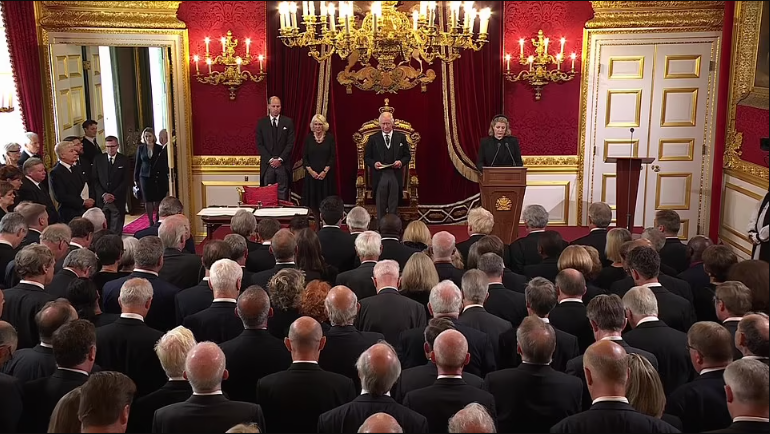 ‘And in carrying out the heavy task that has been laid upon me, and to which I now dedicate what remains to me of my life, I pray for the guidance and help of Almighty God.’ 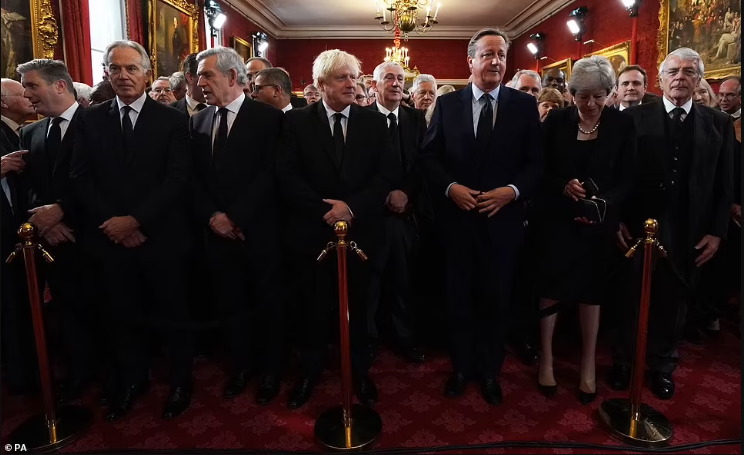 During the event, the Lord President – Conservative MP Penny Mordaunt – announced the death of the sovereign and called upon the Clerk of the Council to read aloud the text of the Accession Proclamation before the body signed the document. It includes Charles’s chosen title as King, already known to be King Charles III. 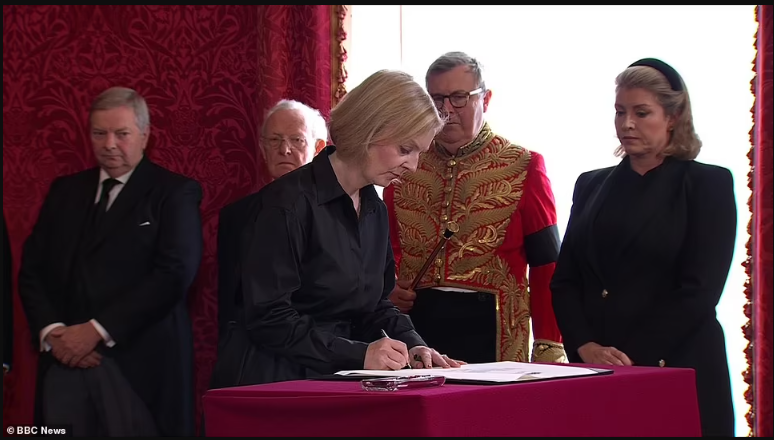 Charles III is expected to then enter for the second part of the council at 10.20am, attended only by privy counsellors, and makes a personal declaration about the death of the Queen. He will take an oath to preserve the Church of Scotland and signs two documents to record it, with his wife Camilla and his son Prince William among those witnessing his signature.

At 11am a Principal Proclamation will be read in public for the first time by the Garter King of Arms in the open air from the balcony overlooking Friary Court at St James’s.

Opening proceedings at the Accession Council, the Lord President said: ‘My lords, it is my sad duty to inform you that Her Most Gracious Majesty, Queen Elizabeth II, has passed away on Thursday the 8th of September 2022, at Balmoral Castle. I propose that, when certain necessary business has been transacted, a deputation consisting of Her Majesty, His Royal Highness, the Archbishop of Canterbury, the Lord Chancellor, the Archbishop of York, the Prime Minister, the clerk of the Council, and myself, shall wait on the King and inform him the Council is assembled.’ 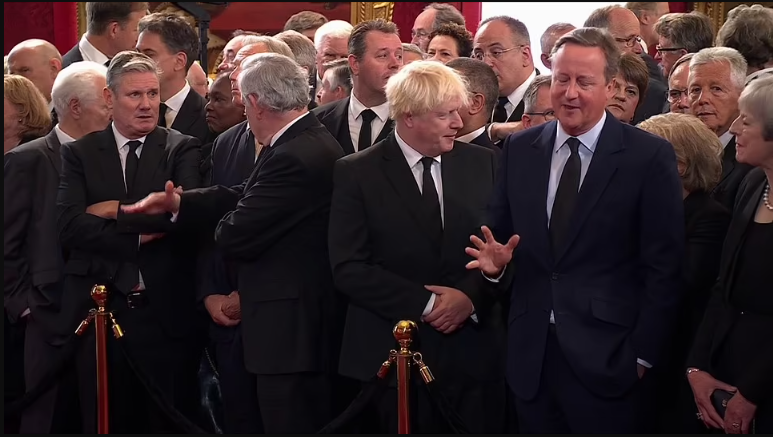 Reading the text of the proclamation, the clerk of the council said: ‘Whereas it has pleased almighty God to call to his mercy our late Sovereign lady Queen Elizabeth II of blessed and glorious memory, by whose decease the Crown of the United Kingdom of Great Britain and Northern Ireland is solely and rightfully come to the Prince Charles Philip Arthur George.

‘We, therefore, the lords spiritual and temporal of this realm, and members of the House of Commons, together with other members of Her late Majesty’s Privy Council, and representatives of the realms and territories, aldermen, and citizens of London and others, do now hereby, with one voice and consent of tongue and heart, publish and proclaim that the Prince Charles Philip Arthur George, is now, by the death of our late Sovereign of happy memory, become our only lawful and rightful liege lord, Charles III, by the grace of God, of the United Kingdom and Northern Ireland, and of his other realms and territories, King, head of the Commonwealth, defender of the faith, to whom we do acknowledge all faith and obedience with humble affection, beseeching God, by whom kings and queens do reign, to bless His Majesty with long and happy years to reign over us.’

He declared to the room ‘God Save the King’ and the packed room repeated the famous phrase.

The historic event comes after Charles gave a landmark address to the nation on Friday and paid a poignant and moving tribute to his ‘darling Mama’ the Queen.

The King pledged his whole life as serving as the new sovereign just as the Queen did, saying: ‘That promise of lifelong service I renew to you all today’.

And he used his speech to announce that he had created his son William the Prince of Wales, with Kate the Princess of Wales and expressed his ‘love for Harry and Meghan as they continue to build their lives overseas’, a symbol of his bid for reconciliation amid past troubles with the Sussexes.

He also paid tribute to his ‘darling wife’ Camilla, calling her ‘my Queen Consort’, saying he can ‘count on her loving help’ and praising her by saying: ‘I know she will bring to the demands of her new role the steadfast devotion to duty on which I have come to rely so much.’